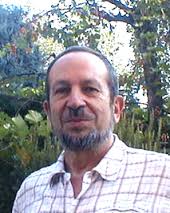 Alberto Arecchi, born in 1947, is an architect and professor of Design and history of Art, in Pavia in Italy, where he lives. He is president of the Cultural Association Liutprand. He has spent fifteen years in Africa working on international development projects. He is the author of many books relating to European History.

Arecchi has also written about Atlantis in Atlantide, Un mondo scomparso, in which he builds on investigations originally begun in the 1920s by F. Butavand and Jean Gattefosse. Arecchi’s book[079] contains some radical ideas:

He claims that all this ended around 1225 BC when seismic activity in the region caused the land bridge to disappear and the dam that contained the inland sea to rupture and Atlantis to vanish. His date is based on the interpretation of Plato’s 9,000 ‘years’ as 9,000 lunar cycles. Arecchi further claims that the Gibraltar Dam was breached around 2500 BC. He also envisages the Maltese Islands connected to both Sicily and Tunisia before this breach.

An outline of his understanding of the Atlantis story, in Italian and English, can be found on the Internet(e) in a 2004 paper entitled Empire of Atlantis: From the Mediterranean to the New World, in which he reviews the evidence for early Mediterranean influences in the Americas and particularly the work of the controversial Barry Fell, who identified North African scripts on markers at a number of locations in North America. Arecchi sees this as support for his Atlantis location off the coast of today’s Tunisia and that there was trans-Atlantic Atlantean influence!

In fairness, the contentious opinions of Fell deserve a look, so a vindication of his epigraphic work(h) should also be read, as well as further corroboration by more recent DNA studies(i).

>Part of Arecchi’s theory includes a landbridge between Italy and North Africa, in his own words – “At that time, the sea today known as the Mediterranean Sea had to be divided into two parts, placed at different levels and deprived of mutual communications. The western Mediterranean and the Tyrrhenian were – as they are today – in communication with the Ocean, through Gibraltar, opened more than a thousand years before. The eastern part – i.e. the Greeks’ Mediterranean – was properly an “interior sea”, like a lake, from the Small Syrte to the Syro-Palestinian coasts, including lower Adriatic and Candia Sea (while the Aegean territory, all emerging, was a plain, crowned by volcanic mountains). Its waters would be approximately 300 m under the level of today. We will note this level as “level zero”, in order to measure the relative altitudes.” (see map)< 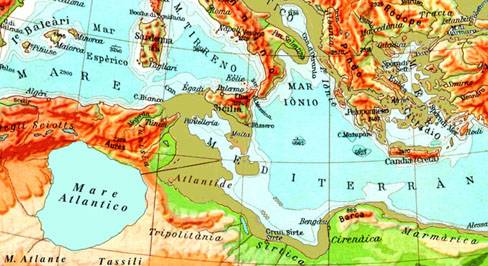 However, in November 2011, I came across an Italian website(b) that included two articles by Arecchi which offer maps of two different locations for Atlantis. Nave di Atlantide? includes the North African site mentioned above. La Vera Atlantide incorrectly attributes Atlantis as a unified and much enlarged Balearic archipelago to Arecchi. I contacted Professor Arecchi, who confirmed that he is only advocating a site 100 miles SE of Malta (see map). The reference to Mallorca in the other article he attributes to a “free-interpretation” of his only thesis.

Arecchi claims that the people known as ‘Tjehenu’ or ‘Tenehu’ by the Egyptians were the Atlanteans of Plato’s narrative, an idea echoed by Ulrich Hoffman.

Arecchi’s book, referred to above, is now available as a free pdf file(c), unfortunately, it is in Italian and pdf files are sometimes difficult to translate. Several papers relating to his architectural interests can be found on the academia.edu website.

I believe this book to be an important contribution to the Atlantis debate so if I can find an efficient means of translating it, I will post it here. In the meanwhile, an abstract of his book, in English, is available online(d). A more extensive précis of his theories, in English and Italian, can be read in Archive 6912.

(i) The Arabian Horizon – The Cherokee Compass | MalagaBay (archive.org)