Rockall is an uninhabited islet in the North Atlantic, northwest of Donegal in Ireland. It appears to have been first marked on a map in 1640(c).  This ostensibly insignificant piece of stone is around 80ft by 100ft at the base and approximately 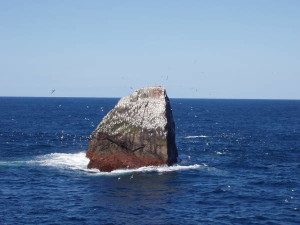 70ft in height. Nevertheless, its ownership is disputed by Ireland, Iceland, the Faroe Islands and the United Kingdom.

Rocabarraidh which was a mythic island referred to in the folklore of the Lordship of the Isles, a Scottish title, is generally accepted to be an early allusion to Rockall. The Atlantic rock is considered as part of the Hebridean parish of South Harris.

In June 1997, Greenpeace declared Rockall to be the independent state of Waveland(f).

Jean Deruelle credits Robert Graves with being the earliest, although only briefly, to consider the Rockall Bank as the location of Atlantis(e).

Recently, a new claim has been made in connection with Rockall, namely, that it is a remnant of the Atlantis highlands, with the plain so vividly described by Plato, now situated under the sea to the southwest of the rock. Two extensively illustrated French websites(a)(b) expound this theory. Which, however, are somewhat less than convincing. However, a 1938 newspaper report(d) suggests that a proposed linkage with Atlantis goes back much further!

In December 2016, Jonathan Northcote published 16.484ºW 58.521ºN, Atlantis, Found?[1369], in which he offers spirited support for this location using a mass of geological data and underwater topography. He also suggests that Gades may have been Ireland. In January 2019, Northcote revised his book with additional material and published this second edition with the title of Atlantis, Found? An investigation into ancient accounts, bathymetry and climatology [1611].

Stuart L. Harris, the prolific American researcher, has, in recent private correspondence with me, supported the vicinity of Rockall as the location of Atlantis, dating its demise to around 9577 BC. He later expanded on this in a highly speculative paper published on the Academia.edu website.

At the end of September 2018, the UK’s Daily Star, a well-known comic for adults, tried to revive the idea of Atlantis in Frisland(g) . They based their brief article on the speculations of Matt Sibson, presented as an ‘expert’, who admits that “there are still some questions that need clearing up.” I would like to know why Frislanders in the middle of the last Ice Age would want to attack a non-existent Athens 4,000 km away? If Sibson is considered to be an expert historian, my cat is a brain surgeon. Jason Colavito had a few words to add regarding Sibson’s pathetic claims(h).

Incredibly, a week later the same ‘newspaper’ cited Sibson again, this time claiming that Rockall was the remains of Atlantis(i), an equally silly idea that is not new. The UK’s online Express recycled this nonsense in January 2020(k).

Kevin A. & Patrick J. Casey have published a series of papers on the Academia.edu website outlining a globally catastrophic event that occurred thirteen thousand years ago, which they refer to as the ’13K Event’, but is more popularly known as the onset of the Younger Dryas period. In February 2019, they published Atlantis Revisited (j), in which they claim that Rockall was the location of Atlantis.

>Less extreme is a claim by John Esse Larsen that in support of the theory that Homer’s Odyssey refers to adventures in the North Atlantic he suggests that Rockall is referenced in Odyssey 10.513(l).<