Atlantis in Wisconsin: New Revelations About the Lost Sunken City, [0103] is one of Frank Joseph‘s earliest books 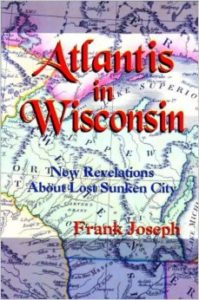 in which he conjured up highly speculative links between Atlantis and the geology, archaeology and mythology of Wisconsin. He returned to the Atlantis Wisconsin theme a few years later with the publication of The Lost Pyramids of Rock Lake[0105]. Joseph promotes the idea that the copper mines of Michigan were used to fuel the European Bronze Age, an idea promoted by others, including most recently by Gavin Menzies, who suggests that the Minoans exploited the Michigan mines. Menzies had already written about the Chinese ‘discovering’ America decades before Columbus, but seems reluctant to attribute to the Chinese of an earlier age the ability to also have reached America, but is content to accept that the Minoans did!