Atlantis: The Andes Solution [040] by Jim Allen proposes the revolutionary theory that Plato’s Atlantis was located on the 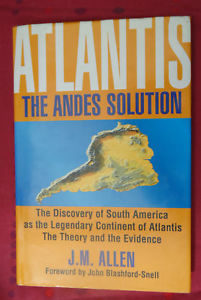 Antiplano of Bolivia around Lake Poopó. Allen lays great emphasis on the topography of the area compared to the descriptions in Plato’s dialogues. When he compared the physical features described by Plato with the site on the Altiplano and found that there was a very close match except that all the dimensions were out by a factor of two. He explains this by pointing out that unlike the Greeks, the pre-Columbian South Americans used a base 20 for counting.

This book is now back in print and supported by an extensive website(a).