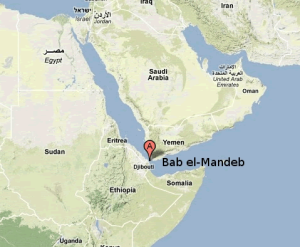 Bab-el-Mandeb, which means gate of tears, is the name given to the strait at the southern end of the Red Sea>and has been identified as one of the two routes taken by humans ‘out of Africa’ around 120,000 years ago, the other being through Sinai.<

The Strait has also been identified by some researchers as the location of the Pillars of Heracles referred to by Plato. This idea is advocated by Jacques Hébert, Thérêse Ghembaza and Sunil Prasannan who have respectively located Atlantis at Socotra, Meroë and Sundaland.

The French historian Philippe Potel-Belner also identifies Bab-el-Mandeb as the Pillars of Heracles(c) beyond which lay Atlantis on a long plain on the west coast of India(b).

A fictional account of the destruction of Atlantis in the Red Sea and its relationship with the biblical Deluge by Orson Scott Card is now available on the Internet(a).