Robert Ballard (1942- ) is probably best known for his discovery of the Titanic in 1985. His discoveries in 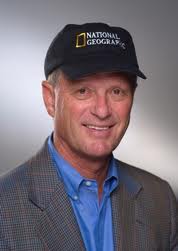 the Black Sea reinforced the idea put forward earlier by Ryan & Pitman[025] that the breaching of a landbridge at the Bosporus circa 5600BC had turned it from a much smaller freshwater lake into a saltwater sea. Speculation followed that this event was the source of the biblical tale of Noah’s Deluge! In a follow-up to that, a TV special(b) aired by ABC before Christmas 2012 saw further evidence from Ballard linking Noah’s nautical adventure with the Black Sea.

Ballard, a National Geographic explorer-in-residence, has described the story of Atlantis as ‘logical’ as it is compatible with the catastrophic floods and volcanic eruptions recorded throughout history. However, he rules out Santorini as Atlantis because the eruption there conflicts with the date given by Plato(a).

However, he is not inclined to accept the existence of Atlantis because “no Nobel laureates” have said that what Plato wrote about Atlantis is true. This is a totally specious argument as Nobel Prizes are only awarded for Literature, Medicine, Physics, Chemistry, Peace, and Economics and not for History, Archaeology or Classical Studies. Nevertheless, over the past century quite a number of modern classical scholars have expressed their acceptance of some or all of Plato’s Atlantis details as having a real historical basis.

Apart from that, what many scientists think as opposed to what they say is often quite different, as research grants are not normally given to mavericks. It’s little consolation that the worst a nonconformist faces today is penury rather than pyre.