Daniel P. Buckley (1962- ) is an English-born writer of fiction and non-fiction including a short ebook, “Atlantis”, Solon and Plato for Frost?[1133],  which charts the identification of Minoan Crete by K.T. Frost over a 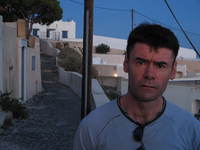 century ago and the development of the ‘Minoan Hypothesis’ as the later discoveries on Santorini were brought to public attention.

Buckley later published the second edition of his first offering and in 2018, he expanded and recycled much of that second edition with the revised title of Atlantis from Neith and Solon for Plato and Frost [1855].