Libya, referred to as Ta Tenehu, is first mentioned in Egyptian texts around 1200 BC, when the name was applied to a relatively small district in the western Nile delta. Unfortunately, the Libya referred to by Plato and other early writers is not geographically delineated with any degree of clarity. This is just another example of the unintentional ambiguity that is common in the writings of classical authors. Sometimes Libya appears to refer to all of Africa while at other times it is just the name for the land immediately to the west of Egypt. Robert Temple[736.414] quotes Percy Newberry, who referred to the variety of meanings applied to the term Libya by different ancient commentators. Temple also offers evidence that North Africa was a fertile region as late as 2500 BC. 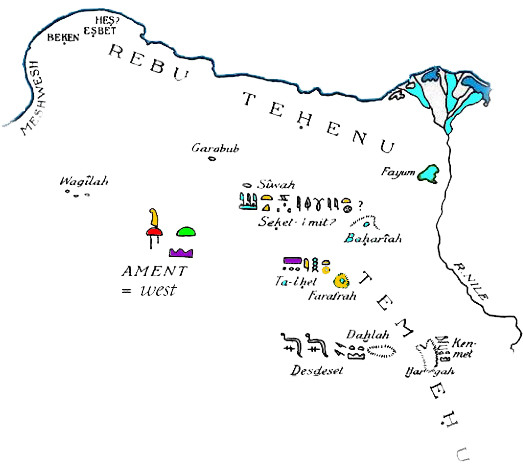 Herodotus stated that there were only three continents, Europe, Asia and Libya and that the latter was surrounded by sea except where it joins Asia (Bk IV.42). He also mentions that the names of all the Greek gods came from Egypt except Poseidon who came from Libya where he had always been worshipped (Bk II.50). This is interesting since Plato pronounced Poseidon the founder of Atlantis.

Ancient Libya had a megalithic culture, the remnants of which can be seen in the likes of the Terrgurt valley where “there had been originally no less than eighteen or twenty megalithic trilithons, in a line, each with its massive altar placed before it” according to H. S. Cowper, a 19th-century explorer[1566.279].

In the context of the Atlantis story Plato declares that Atlantis was ‘greater’ than Libya and Asia together. On the face of it, this might appear to be a geographical comparison, but it has been argued that the Greek word ‘meizon’ which was used here means ‘greater’ or ‘more powerful’ rather than larger.

An English Professor of History, P.B.S. Andrews has suggested that Plato may have misread Solon’s notes and used the word for ‘larger than’ instead of ‘midway between’ where there is a difference of only one letter.>Diego Ratti has also opted to translate meizon as ‘between’ in his 2021 book Atletenu [1821]. When challenged on his interpretation he produced a spirited defence of his position(d).<

Irrespective of the exact meaning of ‘meizon’ in this text, it is quite clear from it that ancient Libya as known to Plato was a separate entity to Atlantis. Notwithstanding this, the Cyrenaica region of modern Libya has now been identified as the home of Atlantis itself(a) by an anonymous German researcher who planned to lead an expedition to their proposed site in late 2006. Based on a study of satellite images he is convinced that a 590 x 320 km plateau to the east of Benghazi (ancient Berenice) is the location of Plato’s Atlantis. This mysterious researcher, using the pseudonym ‘a. petit’, claims that this area had been a large island in ancient times. The results of that 2006 expedition are now available, in German, in book form, entitled Expedition nach Atlantis[673].

In an address[0750.419] to the 2008 Atlantis Conference, George Sarantitis quotes a number of ancient authors who describe journies in and around Libya that have led him to conclude that the flooded chotts of Tunisia and Algeria had been linked to a much enlarged Lake Chad(b) further south creating a large Libyan peninsula. This situation, he believes, pertained until the 3rd century BC when the waters dried up and eventually led to the topography we have today.

>An interesting overview of the history of Libya from the earliest time can be read on the temehu.com website(c).<