Nicolae Densusianu (1846-1911) was a Romanian ethnologist and folklorist, although he was born in Transylvania, at the time 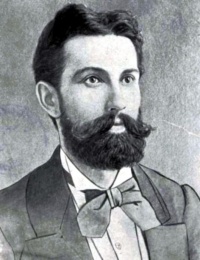 part of the Austro-Hungarian Empire. He claimed that ancient Dacia had been the centre of a widespread Pelasgian Empire. His major work, published posthumously, Prehistoric Dacia, includes the suggestion that Atlantis had been located in Dacia, now Romania. The text of this extensive book, in English[1597], is available in its entirety on the Internet.

His excessive nationalism, popular during the communist regime, is now deemed unacceptable and his work discredited.

*Nevertheless, interest in Densusianu and aspects of his theories have seen a resurgence in books from researchers such as Adrian Bucurescu and Alexandra Furdui.*

Densusianu’s work has also been recently echoed in two books by the Serbian historian, Ranko Jakovljevic, although he moves the focus further west from Romania to his own native Serbia.