living in  Slovenia.  He is a computer science graduate from the University of Maribor. His interest in prehistory and ancient cultures led him to develop a new theory(a), which places the location of Atlantis in the Southern Adriatic Basin. He contends that the destruction of Atlantis was a consequence of an asteroid impact, recorded in Greek mythology as Phaëton, that struck either the Ionian or the Tyrrhenian Sea just west of Sicily. 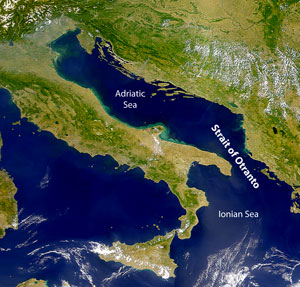 Hodžic also claims that the Pillars of Heracles were situated at the Strait of Otranto and that the nearly 70,000 stone blocks or stecaks spread through Bosnia and the surrounding region were remnants of Atlantean structures. Hodžic’s ideas are interesting but not wholly convincing.

In 2019, Hodžic published, in Croatian, Nepoznato doba megalita [1689] (The Unknown Age of the Megalith) as well as a ten-page synopsis in English(b). A further paper about his Adriatic Atlantis is also available(c).