Phaëton in Greek mythology was the son of Helios the Greek sun god. Phaëton was also the name given to a comet that impacted or had a close encounter with the Earth in the 13th century BC. The Egyptians knew this comet as Sekhmet. Ancient inscriptions record that some of the consequences of this dramatic encounter were the drying up of the Nile and the desertification of Libya.

Michel-Alain Combes has noted(j)  that Phaëton has also been associated “with Anat in Syria, the star of Baal in Canaan (Palestine and Phenicia), Absinthe, The star of the Apocalypse) among the Hebrews, Surt in the countries of the north.” He also suggests that the legends of Typhon (Hesiod) and Phaeton (Ovid), although usually thought to refer to separate events, are just different versions of the same encounter with a comet in the late 13th century BC.

Günter Bischoff has published two lengthy articles(n)(o) on the Atlantisforschung website which includes a comment that might account for the number of locations where apparent sightings of the comet were reported. “Now it is easy to explain why Phaethon should have been sighted over Greece, Egypt, Syria, India and other countries. During its orbits lasting several days, it will have flown over many inhabited areas on its elliptical orbit. Some observers may even have seen it several times and from different directions.”

A 2012 paper by Peter James and M.A, van der Sluijs entitled ”Silver’: A Hurrian Phaethon’ (l) concluded that “there is an attractive pattern of correspondences between the well-known Greek myth of Phaethon and the Hurrian myth of Silver.” Silver was a character in Hurrian mythology, also known as Ushu.

Interestingly, Plato records in Timaeus how Phaëton caused immense devastation but does not link it directly with the destruction of Atlantis but the context implies an event that was in the distant past, considerably earlier than Solon. Some ancient authorities, such as Eusebius and Isidore of Seville, have associated Phaëton with the time of Moses.

The poet Goethe considered the story of Phaëton to have had a real astronomical origin.

Franz Xavier Kugler was a Jesuit priest who spent over thirty years studying ancient astronomical texts written in cuneiform. In 1927, he published a paper in which he concluded that an asteroidal impact in the Mediterranean inspired the story of Phaëton.

More recently, Bob Kobres has written a number of articles on the subject of Phaëton having a cometary origin(k).  Some of these papers can be found on the Internet(a). Kobres dates this Phaëton event to around 1200 BC.

Stavros Papamarinopoulos from the University of Patras in Greece presented a paper to the 2005 Atlantis Conference held on Melos in which he linked Plato’s Phaëton with an encounter between the earth and cometary fragments around 1200 BC.

Emilio Spedicato opted for 1447 BC as the likely date of the Phaëton explosion. He describes this as a super-Tunguska event, which exploded over southern Denmark(m). He further contends that the after-effects assisted the Israelite Exodus from Egypt.

Spedicato’s identification is comparable with Jürgen Spanuth’s idea that Phaëton was a fragment of Halley’s Comet. Two other followers of Spanuth, Günter Bischoff and Walter Stender have written extensive papers, in German, on a meteorite impact with Northern Europe around 1220 BC, which they identify as Phaëton(c). The same interpretation has been applied specifically to Lake Chiemgau in S.E. Bavaria and is expanded on in papers by Barbara Rappenglück among many others(d)(f).

>The late Bernhard Beier published an article on the Atlantisforschung website regarding Spanuth’s Phaeton theory that proposes a North Sea impact around 4.5km south of Helgoland with the consequent destruction of Atlantis. Beier concludes his comments with “Spanuth’s assumption that the Phaethon legend represents a mythical representation of catastrophic events from pre-Hellenic times corresponds exactly to Plato’s view of things and can therefore still be regarded as open to discussion. His chronological assignment of these events to the end of the ‘Bronze Age’ still seems worthy of discussion. On the other hand, the equation of the assumed Phaethon 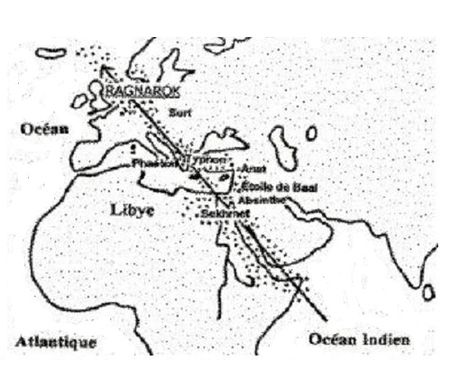 impact with the Atlantis catastrophe, which he made quite naturally and without further ado, lacks any exegetical basis, even if it may initially appear quite logical in the context of Spanuth ‘s theory.”(p) There are aspects of the Phaëton story that are still debated. Was the Phaëton of Greek mythology inspired by a close encounter with a comet? Did it destroy Atlantis? Are we dealing with an impact or just a very close encounter? What was the flight path of the comet? One suggested route is shown here, where it was given different names along the way.<

Holger Kalweit, who also follows Spanuth in identifying Heligoland as a remnant of Atlantis, claims it was destroyed in 1222 BC by Phaëton.

Dale Drinnon has argued(g) against any connection between Phaeton and the destruction of Atlantis saying “There are two different kinds of catastrophes being described and distinguished from one another and the Phaethon event is categorically differentiated from the Destruction of Atlantis in the Atlantis dialogues of Plato. There is no good reason to equate the two and certainly no textual justification for doing so.”

Allan & Delair refer to the central cause of the catastrophe described in their book[014] as Phaëton, which they claim was cosmic ejecta from a supernova in the Vela constellation.

Amanda Laoupi offers an extensive article on the history of the Phaëton myth and its interpretation in both ancient and modern times.

Phaëton was also the name given by Johann Gottlieb Radlof (1775-1829) to a planet that he believed disintegrated after a collision with a comet, within human memory, resulting in the asteroid belt.