From the Strait of Gibraltar to Atlantis (L) 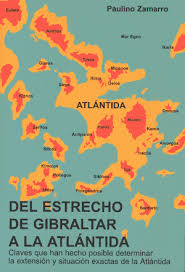 Gibraltar a la Atlantida. Zamarro contends that a Gibraltar Dam existed until 7,500 years ago. He believes that silting at Gibraltar when the sea levels were lowered during the last Ice Age led to the creation of this dam or land bridge. This dam was then breached when the oceans again rose as the glaciers retreated, leading to extensive flooding in the Mediterranean. Zamarro places Atlantis in the Cyclades, where it had flourished during the Ice Age until it was inundated following the rupture of the dam.

It is worth pointing out that Zamarro dates this breach of a Gibraltar dam to the same period as the inundation of the Black Sea as postulated by Ryan and Pitman. Could there be a connection?