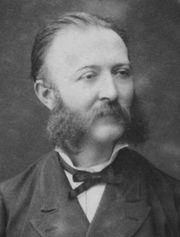 Paul Gaffarel (1843-1920) was a French historian who in his 1869 work, Rapports de l’Amérique et de l’Ancien Continent [1435],  supported an Atlantic location for Atlantis. He believed that the influence of Atlantis could be detected in the Americas, Egypt and the Canaries.

In a later book, Histoire de la découverte de l’Amérique [1436], he records a belief among the native Caribs of the southern Caribbean islands that the Antillies were once a single landmass, with a similar tradition found in Haiti.

>Paul Gaffarel wrote a number of papers between 1875 and 1890 on pre-Columbian trans-Atlantic voyagers from Europe. He presented a 38-page paper on the Phoenicians’ voyages to America to the Congrès International des Américanistes in Nancy (France) in 1875. Other essays concerned the Vikings and ancient Irish(a).<