Lixus is an ancient site on a hilltop overlooking the Atlantic Ocean, north of the port of Larache on the Loukkos River between Rabat and Tangier in Morocco. Its topography has led some to favour it as a possible location for Atlantis. Jonas Bergman was a 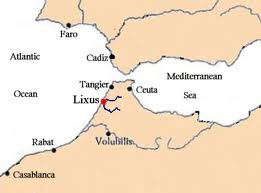 leading exponent of this idea but has recently(a) opted for a site further south between Rabat and Casablanca. Unsurprisingly, Frank Joseph has also claimed [108.111] an Atlantean connection for Lixus as well as Mogador, another ancient Moroccan port city situated further south.

It is generally accepted that it was a prehistoric seaport that the Carthaginian occupied around 800 BC, when they built on top of more ancient structures, so that its ruins today show three distinct cultural styles. On top are the most recent Roman remains, underneath which are Carthaginian and below that again a type reminiscent of the pre-Incan masonry in Peru. This lower style incorporates huge massive stones and the peculiar polygonal design found at Sacsahuaman and Andalusia in Spain. The explorer Thor Heyerdahl and the writer R. Cedric Leonard(b) have both remarked upon this feature. The question of how such unusual but similar types of masonry can be found on both sides of the Atlantic instantly leaps to mind.

Understandably, some have interpreted this as evidence of a transatlantic civilisation – Atlantis.  If not, what are these strangely similar masonry styles doing on opposite sides of the Atlantic Ocean?

According to Dr. Gerald S. Hawkins(1928-2003), formerly of the Smithsonian Astronomical Observatory, these lower megalithic walls are carefully aligned with the sun, noting that the earlier name for the city was Maqom Shemesh, or “City of the Sun” (Hawkins, 1973).