The Sargasso Sea is a region of the North Atlantic surrounded by ocean currents. Its limits are roughly 70-40° W and 25-35° N. It has a number of remarkable features, (i) it is very salty, (ii) it contains masses of seaweed of the genus ‘Sargassum’, giving the region 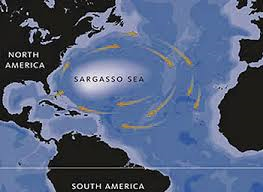 >Wikipedia notes(b) that “The Sargasso Sea may have been known to earlier mariners, as a poem by the late 4th-century author Rufus Festus Avienus describes a portion of the Atlantic as being covered with seaweed, citing a now-lost account by the 5th-century BC Carthaginian Himilco the Navigator.” This early reference is used by supporters of the idea of the possibility of very early visits by Phoenicians or Greeks to America.<

Chedomille Mijatovich, the Serbian politician, was probably one of the first to associate the Sargasso Sea with Plato’s ‘shoal of mud’ in a letter to Hyde Clarke.

In 2000, Andrew Collins in an effort to justify his Cuban location for Atlantis needed to find Plato’s ‘shoals of mud’ in the Atlantic and for me, in what seems to have been an act of desperation he decided that the Sargasso Sea fitted the bill [072.42]. However, he does not explain how anyone can mistake seaweed for mud!

In 1925, Dr A. Selwyn Brown wrote an article in the New York Herald, which was relayed around the world(a) in which he supported the Sargasso Atlantis theory. Around the same period the American naturalist, William Beebe, following an intensive study of the Sargasso was also reported(b) to have subscribed to the idea of the Sargasso as the location of Atlantis.

It is obvious that the Sargasso Sea is centred to the west of the Mid-Atlantic Ridge and not over it as implied by some writers, particularly those who want to link it with an Atlantis situated on the MAR. Clearly, Plato’s account of the aftermath of the sinking of Atlantis describes impassable waters due to mud, not seaweed. Contrary to popular belief the Sargasso Sea is not a hindrance to navigation.