Lisbon, capital of modern Portugal was previously called Olissipo, which is a modification of its Phoenician name ‘Alis Ubbo’ that some writers, such as Steven Sora, suggest that it means ‘the port of 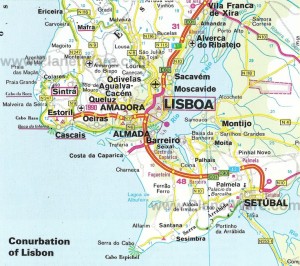 Ulysses’. Later, under the Romans, it was known as ‘Felicita Julia Olisipo’ and renamed by the Moors ‘Aschbouna’.

Lisbon has been identified by some with one of the first ten kings of Atlantis. One of whom was called Elasippos and it is claimed that he gave his name to that part of the Atlantean empire over which he ruled. The assumption is that over time Elasippos was corrupted to Lisbon. However, Plato pointed out that the names given by Solon had been Hellenised and consequently Elasippos would probably have been originally known by a totally dissimilar name and so any suggested connection with Lisbon would appear to have no real foundation.

Steven Sora, in The Triumph of the Sea Gods[0395.219] , maintains that the Lisbon area held the true location of both Troy AND Atlantis. He repeats this in his essay in Douglas Kenyon’s Forgotten Origins[1191].