Jaén is a large town north of Granada in Andalusia, Spain, which Georgeos Díaz-Montexano has claimed had an ancient configuration consisting of concentric rings similar to Plato’s description of Atlantis. He supports this idea with an extensive website(a) about the city. Elsewhere(b) he including an image of concentric rings painted on pottery found in Jaén, which is now in the National Archaeological Museum in Madrid. (see image here) 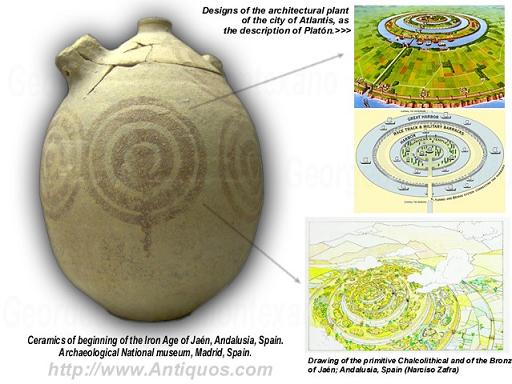 Stuart Webb in his brief book[1153] noted that “the Romans called this strange place ‘Auringis’ from the Greek ‘Ouringis’ although neither Romans nor Greeks were its builders. Díaz-Montexano speculates that Auringis or Ouringis translates into the ‘city of the rings’ from an ancient Indo-European word meaning the ‘Ring’.