Georgeos Diaz–Montexano (1966- ) is the nom de plume of Cuban born Jorge Diaz Sanchez. He has been exploring off the coast of southern Spain and Gibraltar for evidence of Atlantis. He is the founder of the Civilisations Origins Scientific Society and is a 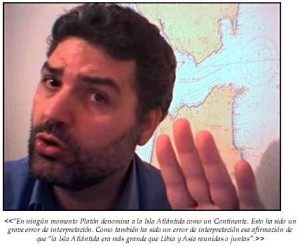 leading advocate for the Afro-Iberian location theory. He contends that Atlantis was only partially submerged and that parts of it, which remained above water, are now to be found in south west Spain and northern Morocco.

Jacques Collina-Girard who, the following year also opted for the Strait of Gibraltar and more specifically Spartel Island mirrored Montexano’s theory on the location of Atlantis, first expressed publicly in April 2000. Intense rivalry exists between the two men as is evident from the content of Diaz-Montexano’s websites.

More recently Diaz-Montexano has also accused Dr. Rainer W. Kühne of plagiarism(a) and for good measure threw in a few unkind words about Robert Sarmast and his identification of Cyprus as the location of Atlantis. His online debates in various forums with other writers have been frequently marred by acrimony.

Diaz-Montexano has studied the earliest versions of the Atlantis story and published a considerable amount of controversial material on the Internet relating to the accuracy of the Platonic texts that we use today. Unfortunately, the English version of this work has been poorly translated from the Spanish leaving a monolingual such as myself unable to clearly understand what has been written. One of the most interesting comments(b) from Diaz-Montexano relate to his study of a 16th century translation of Critias that in his view indicate that 9,000 was NOT the number of years recorded by Solon. His firm conclusion is that Atlantis was destroyed between 1500BC and 1300BC.

Diaz-Montexano has also unearthed a number of ancient Spanish works including a Chronicle of Zaragoza that he maintains includes a number of obvious references to a Spanish connection with Atlantis(c) . Unfortunately, once again, the quality of his English makes any clear reading very difficult. The only ‘Chronicle of Zaragoza’ that I could locate was a two-page document covering the period 450–568 AD that is totally unrelated to the Atlantis question. Nevertheless, it does appear that he has discovered information that may have an important bearing on the resolution of the Atlantis mystery.

Without wishing to detract from any work that Diaz-Montexano has done, it may be no harm to point out that while he has been free with his accusations of plagiarism, he himself has been accused of fraudulently misleading the public regarding his academic qualifications(d).

In August 2012 he published the first volume of a large six-volume work, ATLANTIS <> TARTESSOS. AEGYPTIUS CODEX. Epítome de la Atlántida Histórico-Científica, devoted to arguing the case for a Iberian Atlantis. Unfortunately, this huge undertaking is only available, at least initially, in Castilian Spanish. This promises to be an important addition to Atlantean literature and Diaz-Montexano is to be congratulated for his efforts.

The first volume begins with a critical overview of recent Atlantis theories such as those of Robert Sarmast (Cyprus) and Ulf Erlingsson (Ireland) and then proceeds to analyse the texts of ancient writers wherever they refer directly or indirectly to Atlantis. He cites the original Greek texts together with a modern (Spanish) translation. This first volume is also available as an inexpensive (€1.95) Kindle ebook. July 2015 saw the publication of another Kindle book by Diaz-Montexano entitled ATLÁNTIDA Historia y Ciencia (Atlantis: History and Science)[1105] together with a synopsis online(e).

Late in 2016 will see the broadcasting of a new documentary by National Geographic concerning Atlantis in the Mediterranean. Diaz-Montexano has already been interviewed in connection with this production as has Robert Ishoy. The exact focus of the show, if there is one, is still unclear, but the involvement of James Cameron and Simcha Jacobovici as co-producers has widely publicised.

In conjunction with the filming of the new NG documentary, Diaz-Montexano has decided to publish, in English, the details of his Atlantis studies over the past decades. Available is the introduction and outline of the new book(f), NG National Geographic and the scientific search for Atlantis[1394] published in January 2017, in both English and Spanish, to coincide with the airing of the documentary at the end of that month. 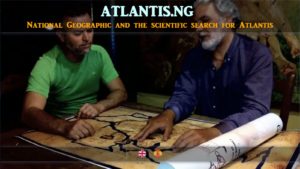