Robert John Langdon is the Brighton based British author of Prehistoric Britain: The Stonehenge Enigma[919],  the first part of a trilogy(b). The book was first published in 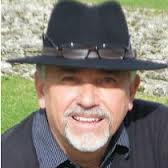 2010 with a second edition brought out in 2013. The final chapter of the second edition is now available online(a).  In it, he contends that the megalith builders came from Africa to Doggerland at the end of the last Ice Age, however, as the waters rose submerging Doggerland, the megalith builders had to move to higher ground on what we now know as Great Britain, eventually constructing Stonehenge as a memorial!

Langdon claims that the Altar Stone at Stonehenge points to Doggerland, which he identifies as the location of Atlantis. He also claims that the Slaughter Stone is in fact a representation of the flooded world of those megalith builders. Langdon is highly critical of the generally accepted interpretation of various features found at Stonehenge, listing 13 items that he claims “don’t make sense”(f).

Another of Langdon’s claims is that “Cro-Magnon/Atlanteans colonised America” based on a study of blood group distribution(e).

In September 2014, Langdon changed his website(c) and published further excerpts from his books.

His second volume was published in 2016[1242]. There are also a number of related free pdfs books available on his website.