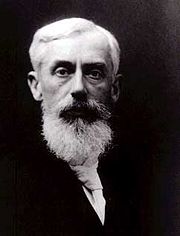 Louis de Launay (1860-1938) was a French mining engineer. He became professor of geology, mineralogy and palaeontology and was also a science historian, a novelist and a poet. He has written extensively throughout his life including a 1936 magazine article[615]  in which he placed Atlantis in Mexico. In 1912 he was elected as a member of the Academy of Sciences and in 1931 he became a 1st class Commander of the Legion of Honour.