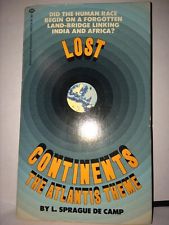 Lost Continents [194] by L. Sprague de Camp is a rational refutation of the ideas of lost continents such as Atlantis and Lemuria and their adoption by fringe cults such as Theosophy. It is a well researched work that deserved its critical acclaim. However, since the location of Atlantis has not yet been definitively identified and no single theory has accommodated all the, quite understandable, ambiguities and inconsistencies in Plato’s text, it is easy to pick holes in any of the theories advanced so far.