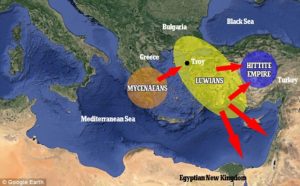 the 2nd millennium BCE between the Mycenaeans in Greece and the Hittites in Central Anatolia.” The Luwian city of Troy has been controversially linked with Atlantis by Eberhard Zangger[483][484], who has gone further and proposed that some of the petty kingdoms in the Luwian territory were part of the ‘Sea Peoples’.

Zangger’s claimed that a Luwian linkage with the Sea Peoples had been strongly supported by the work of British archaeologist, James Mellaart (1925-2012). However, after Mellaart’s death, it was found that he had supported much of what he wrote with forged documents. Zangger has offered the sequence of events that led to this discovery and points out that his Sea Peoples theory predates his involvement with Mellaart(b).

>2023 began with an illustrated paper by Zangger, on the Academia website, offering further insights into the Luwian culture during the Middle and Late Bronze Age(c).<