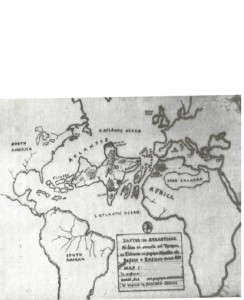 Atlantis in Athens which lasted from 1982 until 1994. His work was then taken up by his son, Theodoros, with equal enthusiasm.

Paschos firmly believed that Atlantis had been located in the Atlantic, which he archipelago, with a large central island, stretching from opposite the mouth of the Mediterranean to the Caribbean. A report in the New York Times of August 29th 1979(b) outlined his theories which included the claim that it had a population of about 60 million and had colonies in Latin America and the Middle East. He further claimed that after the continent sank, around 6500 B.C., its colonies on the islands of Crete, Delos and Thera, formerly called Santorini, became what he calls the new Atlantis. This area was also largely destroyed by volcanic eruption around 1450 B.C.

His map also produced in 1979, is claimed to be based on the writings of Homer, Plato and Marcellus. Interestingly, he shows a vast inland lake in North Africa.

Paschos is also opposed to the ‘ancient astronaut’ views of Erich von Däniken and published his reasons in a Greek language book and a shorter English translation[500]. This shortened English version of his book is now available online(a).