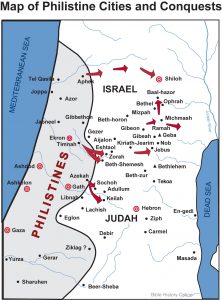 His views had general acceptance, but the inevitable dissenting voices have made this is another controversial area for historians and archaeologists to squabble over.

Trude (1922-2016) & Moshe Dothan (1919-1999) in their People of the Sea[1524] identify the Philistines as part of the ‘Aegean Sea Peoples’, but with regard to the Shardana, they paint a more complex picture, noting that they were one of the Sea Peoples who settled on the coast of Caanan[p.214]. . However, it seems that they were not only part of the attack on Egypt, but at different times performed as mercenaries[p.213] for the Egyptians!

*In July 2019, a report was published offering DNA evidence that the Philistines had come from Europe(a).*

Even more contentious are the views of Jürgen Spanuth who claimed that what he calls the North Sea Peoples took control of what had been the coastal land of what was to become Lebanon and Palestine and were then known as the Philistines. He claimed that these Philistines later integrated with the Caananites to become the highly successful Phoenicians.

Eckart Kahlhofer follows Spanuth with a claim that the Philistines originated in northwest Europe. He presented his reasoning in a paper rather poorly translated into English (see Archive 2809)