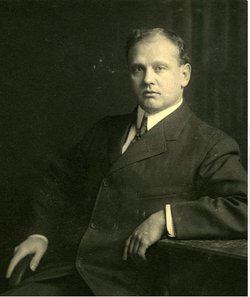 leading archaeologist of the late 19th and early 20th centuries.

In his own right, Magoffin was *professor of classical archaeology at John Hopkins University in Baltimore, Maryland and was also honorary president of the Archaeological Institute of America.

He is credited by Hatcher Childress[620.101] as having been a supporter of Crete as the location of Atlantis, in his 1929 book, The Romance of Archaeology[1383].  This idea that was very much in vogue in the early decades of the 20th century. In fact, the following year Magoffin expanded on his views in his Lure and Lore of Archaeology[1384.34]    when he wrote that Atlantis was “first probably a traditionalized Crete, and then successively Sicily and one of the Cape Verde islands, as discovery compelled Atlantis to recede westward ahead of geographical certainty.”