Crete was until recently thought to have been first settled around 7000 BC. However, excavations at nine sites in 2008 and 2009 have revealed double-edged hand axes dated to “at least” 130,000 years ago. This discovery has suggested(a) that Stone Age man had developed seafaring abilities.

There is a general consensus Crete was known as Keftiu by the ancient Egyptians.

Sir Arthur Evans, knighted for his archaeological finds on Crete, excavated at Knossos from 1900-1905 leading to the discovery of the famous ‘palace’ there. Evans saw Knossos as an administrative centre although it had no defensive features, which might be expected. In the 1970’s Hans Georg Wunderlich (1928-1974) following the views of Oswald Spengler, proposed in The Secret of Crete[826] , that the ‘palace’ was in fact a mortuary temple. This idea has more recently been considered by the late Philip Coppens(c).

As early as 1910 the Rev. James Baikie suggested Crete as the location of Atlantis. A year earlier K.T. Frost outlined parallels between Atlantis and the Minoan empire. In the 1920’s Joseph McCabe a former Catholic priest was also convinced that Crete was the location of Atlantis. More decades were to pass before Dr Angelos Galanopoulos developed the idea further[0263][0264]. There has been doubt that the decline of the Minoan civilisation in the 2nd millennium BC was linked with Theran explosion. Nevertheless, Bacon and Galanopoulos admit that a Minoan explanation for the Atlantis story ‘is correct in all points’ except date, dimensions and location of ‘Pillars’! Many commentators have added reasons to support the Minoan Hypothesis. 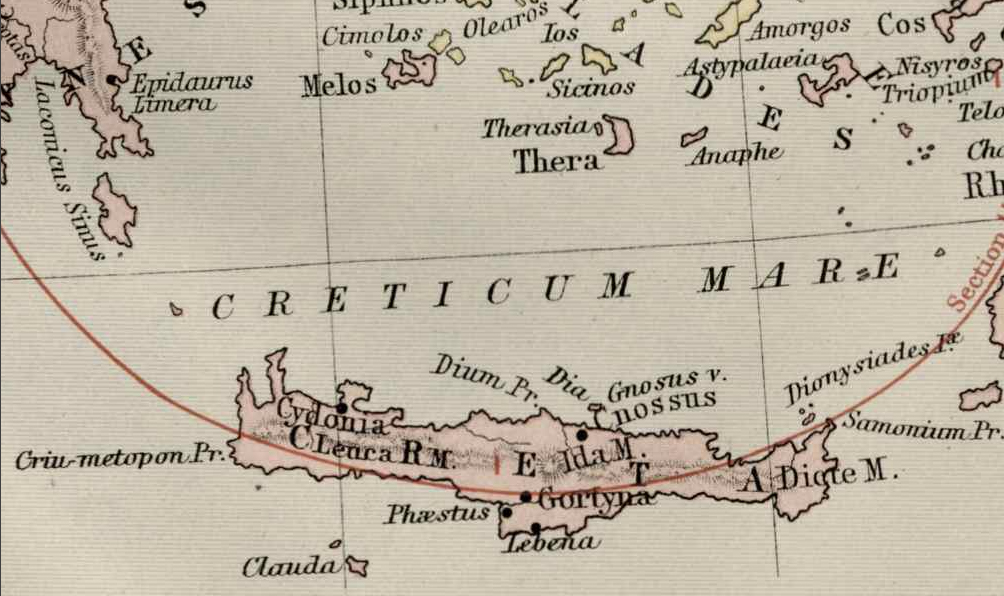 James Mavor records[265] how a stone was discovered on Thera with the name Eumelos inscribed on it in archaic Greek. However, it would be unwise to read too much into a single isolated object.

J. V. Luce lists a number of interesting similarities between Crete and Plato’s description of Atlantis[120].

*Atlantis was the way to other islands. This is an accurate description of Crete as the gateway to the Cyclades and Greece.

*The palace of the Atlanteans is on a low hill 50 stadia inland and near to a fertile plain is a good description of Knossos.

*The description of the land fits perfectly with the southern coast of Crete.

*There were bulls hunted without weapons, which is characteristic of Minoan Crete.

*The construction of the buildings matches Knossos.

Rodney Castleden[0225] uses statistics to demonstrate that Minoan Crete was closer to Plato’s description of Atlantis than previously thought.

Marjorie Braymer[198] highlights the fact that the Cretan Mesara Plain is oblong in shape and one tenth of the dimensions of the plain mentioned by Plato. A fact that gains in importance if a tenfold exaggeration of the dimensions by Plato is accepted.

J. G. Bennett has gone further and argued strongly for a linkage of the destruction of Minoan civilisation, with the Flood of Deucalion, the Biblical Exodus and the obliteration of Plato’s Atlantis. Bennett quotes Plato’s Laws (705.15), which speaks of a significant migration from Crete, as evidence for a major catastrophe on the island.

In April 2004, a BBC Timewatch programme looked at a possible link between Crete and Atlantis focussing on evidence of ancient tsunami damage on the island that they linked to the eruption of Thera. This idea has been refuted by W. Shepard Baird who offers a pyroclastic surge as a more credible explanation(b). In 2010, the BBC broadcast another documentary supporting the Minoan Hypothesis, although not very convincingly in the opinion of this compiler.

On the other hand, Peter James points out that there is no connection in Greek mythology between Crete and Atlas. Further objections include the fact that no ancient canals have been found on Crete, the island did not sink and the failure of Plato to simply name Crete as the location of his Atlantis,*even though it was well-known to the mainland Greeks.*

Recently Gavin Menzies has, unsuccessfully, in my view, attempted to breathe new life into the Minoan Hypothesis in The Lost Empire of Atlantis.

An even less impressive effort to support a Minoan Atlantis is a slender work  by Lee R. Kerr entitled Griffin Quest – Investigating Atlantis [807], who also published an equally useless sequel, Atlantis of the Minoans and Celts[1104].