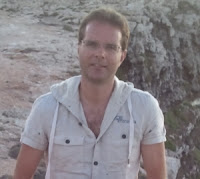 Diego Ratti is a financial consultant by profession and the author of two related books, Wall Street Watchman[1390] and The Sky Watching Trader[1391] . However, his love of astronomy, archaeology and Lampedusa came together in the development of his website(b) . On this small island of Lampedusa in the Strait of Sicily a ‘Stonehenge’ has been identified by Ratti and described in a well illustrated paper and booklet(a)(c) .

In 2015, he published, in Italian, a book on the prehistory of Lampedusa, La preistoria di Lampedusa[1392].

A year later, Ratti also discovered a “prehistoric underwater place of worship” off the eastern coast of the island(d), and later published a video of the site(e), describing it as a temple similar in layout to some of the Maltese temples.

In March 2021, Ratti published Atletenu [1821], in which he places Atlantis in Egypt, with its capital located at Avaris, better know before now as the capital of the Hyksos. He identifies Atlas as “Shamshi-Shu I: the Amorite Prince of Ugarit who in 1646 BC led a coalition of Foreign Kings to conquer Egypt starting the XV Dynasty of the ‘Hyksos'”. The book is carefully constructed and well illustrated, but has no index.

He questions a number of the English translations of the Greek text, offering his own where he deemed it appropriate. One such instance concerns ‘meizon‘, normally translated as ‘greater’ in Tim. 24e & Crit.108e, which Ratti insists should be read as between Libya and Asia, which Avaris clearly is. I pressed Ratti on this interpretation and, after further study, he responded  with a more detailed explanation for his conclusion(g). This is best read in conjunction with the book.

However, although be appears to match a number of Plato’s details with the Nile Delta, there was not enough to convince me. Where are the mountains described by Plato with a series of superlatives? Tim 25a-b, describes Atlantean territory as including part of southern Italy, so where is the evidence for the Hyksos occupying any part of Italy? Where is the evidence that Athens fought with the Hyksos?

However, I must acknowledge the extensive amount of research that has gone into this book, which is available as a  Kindle or paperback, excerpts from which can be read online(f). It is certainly worth a read.

(g) More on Atlantis between Asia and Libya (atletenu.com)