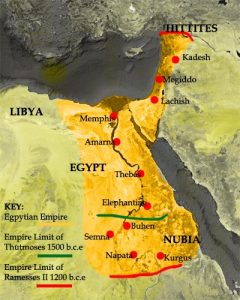 Asian (Tim. 24b). In practical terms, its territory consisted of a few miles on either side of the Nile together with its large Delta. In an expansionist period in the 2nd millennium BC, Egypt controlled parts of what are now Israel, Lebanon and Syria. Over its long history, Egypt itself was overrun by a variety of invaders – Hyksos, Kushites, Assyrians, Persians, Greeks and Romans.

As most are aware the history of Egypt is inextricably linked with that of the Old Testament, leading to the suggestion by some, such as Ahmed Osman(k), that individuals in the Egyptian 18th Dynasty can be identified with some of the Hebrew Patriarchs, most notably Moses and the heretic king Akhenaten. Interestingly, this linkage had been put forward previously by Sigmund Freud!

Osman goes further and contends that the main tenets of Christianity developed on the banks of the Nile [1852] and additionally “provides a convincing argument that Jesus himself came out of Egypt.”  This is in sharp contrast to those that claim that both Moses and Jesus are completely fictitious characters(l).

Despite this, the Greeks arrogantly referred to all non-Greeks, including the Atlanteans (Crit. 113a) as ‘barbarians’. It is of interest that Athene after whom the Greek capital is named originated in Egypt where she was worshipped as Neith.

The late Philip Coppens went as far as to suggest(a) that Greece was an Egyptian colony!

Plato’s text seems to infer that the destruction of Atlantis in 9600 BC was contemporary with Egyptian civilisation, raising archaeological questions regarding the earliest date for the establishment of an organised society in Egypt. Unfortunately, there is not a lot to support this contention. The oldest known art in Egypt was discovered in 2007 when petroglyphs were estimated to be 15,000 years old. The earliest culture along the Nile, identified by archaeologists is that of what is known as the Badarian dated to around 4500 BC. They produced basic pottery, jewellery and used stone tools although they had some knowledge of metals. The Badarians were followed by the Naqada who led on to what we identify as the spectacular ancient Egyptian civilisation. However, in 2007, rock carvings, similar in style to the Lascaux paintings were discovered near the village of Qurta, 650km south of Cairo. The 160 carvings, spread over 1.5km of the rock face, discovered so far, mainly depict wild bulls and have been dated to 13000 BC(h)

September 2013 saw the publication(c)(d) of a more definitive date for the start of the state of Egypt, beginning with the reign of king Aha circa 3100 BC. The evidence indicated that the process of moving from the pre-Dynastic groupings to a form of statehood was more rapid than previously thought. This undermines even more firmly the claims of the Egyptians that their country was founded around 8,600 BC as reported by Plato.

Many writers have remarked how all aspects of ancient Egyptian culture seem to have arrived fully developed, while later dynasties did not surpass some of the achievements of the earlier ones! The conclusion of some is that the fully matured civilisation of the early Egyptians was a legacy from elsewhere.

A more grounded study by Alapan Roy Chowdhury investigates the claim put forward by some researchers that there are remarkable similarities between the cultures of ancient India and Egypt. “Was there a real connection or are these similarities only coincidences?”(j)>The tributetohinduism.com website(n) develops this idea further.<

Robert Schoch has controversially dated the construction of the Sphinx to between 7000-5000 BC, while the megalithic structures at Nabta Playa suggest a sophisticated culture in that region around 5000 BC. Even if both these early dates are correct they are still over four and a half millennia short of Plato’s date. This most likely explanation is that Plato’s number of 9,000 years before Solon is incorrect as 9000 is too neat and may have been a siglum used to express a large but uncertain number or is an exaggeration just as today we speak of having ‘a million and one things to do’.

Some years ago, Egypt was again been proposed as the original Atlantis, in a still (June 2021) unpublished book, The Joshua Crossing, by N. R. James. However, 2006 did see a paper presented by Professor Hossam Aboulfotouh of Minia University, Egypt, placed Atlantis in the Nile Delta. The following year R. McQuillen also offered an Egyptian location for Atlantis, placing it at Pharos near Alexandria.

>In 2020 Jean-Pierre Pätznick, a French Egyptologist, published an article in Pharaon magazine (No 41) about Atlantis and Egypt(o). Thorwald C. Franke has written a critical review of the paper(p).<

More recently (March 2021), Diego Ratti, published Atletenu [1821], in which he placed Atlantis in Egypt, with its capital located at Avaris, better known before now as the capital of the Hyksos. He questions a number of the English translations of the Greek text, offering his own where ‘appropriate’. The book is carefully constructed and well-illustrated, but, although he appears to match some of Plato’s Atlantis details with the Nile Delta, there was not enough to convince me.

A novel idea has been put forward by Mary Whispering Wind(b), who bravely offers the idea that the Atlantean province of Egypt was, Colchis, situated on the east coast of the Black Sea! She bases her claim on an interpretation of Herodotus (Book II.104/5) who was commenting on circumcision being only practised by Egyptians, Ethiopians and Colchians, in my mind, stretching what Herodotus said beyond the acceptable.