Joseph Bosco (?- 1931), according to David Hatcher Childress, was an archaeologist, who identified Malta as the location of Atlantis in 1922. He seems to have been greatly influenced by the research of Giorgio Grongnet de Vasse

Bosco lived in Constantine, then a city in French Algeria. He contributed frequently(a) to the local archaeological society, Societé  Archaeologique du Departement de Constantine, from 1911 until 1927.

The Spanish writer Javier Sierra also refers to Bosco but is probably just quoting the earlier work by Childress. Pierre Carnac, in chapter six of his L’Atlantide,  Autopsie d’un Mythe[219] similarly refers to Bosco as a supporter of the Maltese location. Deloux and  Guillaud in their French A–Z guide to Atlantis[724] note Gozo as Bosco’s more specific choice. Gennaro d’Amato, the Italian  writer also referred to Bosco in his 1930 book on Atlantis[042]. 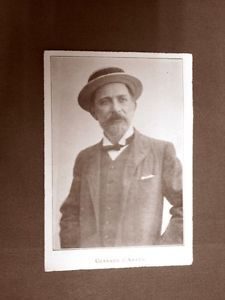 Gennaro D’Amato (1857-1947) was an Italian writer who wrote in the early part of the 20th century[042][043] on the subject of Atlantis. He has also translated the Paul Schliemann hoax story into Italian. His work has been re-printed recently[044].