The Aztecs of Mexico are believed by many writers to have originated as refugees from Atlantis. Their own traditions claim that they came from Aztlan, a land to the east. Francisco López de Gómara was the first European to suggest this link with Atlantis in 1551[332]. Ignatius Donnelly wrote at length on the subject and had his views frequently reflected in the work of writers at the beginning of the 20th century. Even today, some still associate Atlantis with the Aztecs(b), while others think that the Olmecs, predecessors of the Aztecs and Maya were Atlantean refugees(c).

Tenochtitlan was the capital the Aztec Empire and at the time it was captured by the Spanish it was probably one of the largest cities in the world with an estimated population of 200,000.

It is remarkable that the descendants of Moctezuma, the last Aztec emperor are alive and well and living in Spain today as the noble house of Grau-Moctezuma de Toleriu(a).

The Aztec drawing below is interpreted as representing the migration of the Aztecs from an island in the Atlantic to the mainland of America. The assumption is that the island in question was Atlantis! The case for a clear Aztec-Atlantis connection is far from proven. 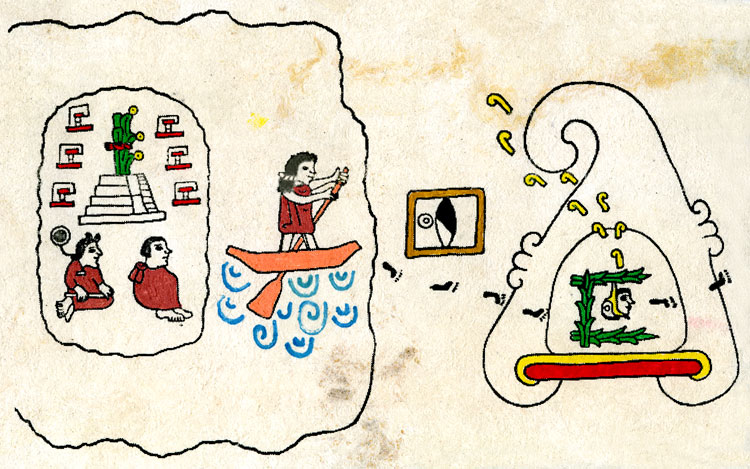 The first Latin writer of Aztec history was Ixitilxochill, himself of Aztec lineage, who maintained that the Olmecs had come to Eastern Mexico from the Antilles via Florida.

(a) The House of Moctezuma | andrewcusack.com

(b) Tenochtitlan: The Atlantis of the Ancient Aztec Empire – Pyramidomania

(c) Ancient Olmecs: Survivors of the city-continent of Atlantis (archive.org) *