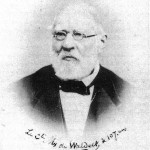 Jean-Frédérick Waldeck (1766-1875) was a French explorer and artist. He spent time in Central America recording Mayan temples and glyphs in a style that suggested possible links with various ancient European and Asian civilisations. It is also claimed that he linked the Maya with both Egypt and Atlantis.

Waldeck was always secretive regarding aspects of his life and by his own estimate was 109 when he died, the image here claims to have been taken when he was 107 years old!