When the Sky Fell

When the Sky Fell: In Search of Atlantis [062], by Rand & Rose Flem-Ath, astounded the world when first published, with its bold claim that Antarctica was the home of Atlantis. The Flem-Aths were inspired by the analysis of ancient maps carried out by Charles Hapgood and his students, combined with his theory of earth crustal displacement, which they refer to as ‘mantle’ displacement. It prompted them to look again at Plato’s Atlantis tale in the light of an ice-free Antarctica. They studied the extinction of species around 9600 BC in addition to the high altitude development of agriculture around the planet at approximately the same time. They perceived clear evidence of a global catastrophe in the tenth millennium BC in worldwide myths. Taking 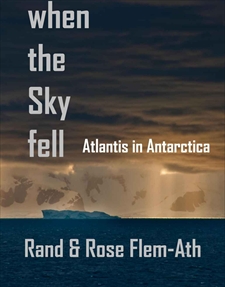 Posnansky’s studies at Tiahuanaco and Schoch’s investigation of the Sphinx together with views of Bauval and Gilbert’s dating of the orientation of the Giza pyramids, the Flem-Aths feel that there is a prima facie case for claiming the existence of an advanced civilisation at least as early as the 10th millennium BC. However, it must be mentioned that the dating conclusions of Posnansky, Schoch, Bauval and Gilbert are all hotly disputed.

In 2009, When the Sky Fell was revised and republished as an e-book(a) with a modified sub-title. A new revised and expanded hardcopy edition, entitled Atlantis Beneath the Ice, was published in April 2012[981].

In November 2009, news came from Sweden(b) that the remains of ancient settlements had been discovered in the far north of the country near the border with Finland, that were radiocarbon dated to 9000 BC. This is totally at variance with accepted theory, which has the region completely covered by ice at that time. However, this new discovery would appear to support the idea of earth crustal displacement at the end of the last Ice Age as described by the Flem-Aths in their original book.

However, we must keep our feet on the ground and realise that while this new discovery may be evidence for crustal displacement, it does not add to the concept of Atlantis in Antarctica. I think we will have to find settlements in the southern polar region to confirm that theory.

*Subsequently, Rand teamed up with the late Colin Wilson as co-authors of The Atlantis Blueprint [063]. The book only dealt with the idea of Atlantis in Antarctica in the first couple of chapters[062]. , but then generally wandered off into other areas for the rest of the book. Some time later, Wilson abandoned his support for the Antarctic location and opted instead for Sarmast‘s proposed site off Cyprus.