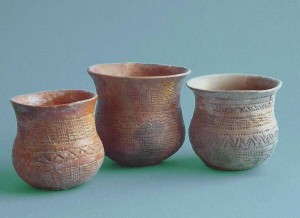 islands. Associated with them are the Wessex people divided into Wessex I and Wessex II, who are found in western Europe and southern Britain, the latter, dated to 1650-1400, were involved with the construction of the later stages of Stonehenge.

Melville Nicholls and others(b) have linked Atlantis with the Bell Beaker culture, identifying a location near Gibraltar as the site of Atlantis. He published his views in Children of the Sea God[944], a 2013 Kindle ebook(a)and a second ebook, The Real and Imaginary Atlantis[945] generally reprising the first, later the same year!*Further comment from Nicholls can be found on an internet forum(f).*

The Beaker People are also claimed to have crossed the Atlantic, where they have been linked to the Adena culture of North America. A leading exponent of this theory is undoubtedly Jay S. Wakefield, co-author of How the SunGod reached America [0751]. He has reprised his views in a 2018 paper on the Diffusion & Migration website(c) . Others have expanded on his concepts(d).