The Parian Chronicle or Marmor Parium is inscribed on a stele made of high-quality semi-translucent marble found on the Aegean island of Paros, which was greatly prized throughout the Hellenic world during the 1st millennium BC. The site of the quarries is now being turned into an Archaeological Park with the intention of it eventually becoming a World Heritage Site.(o) 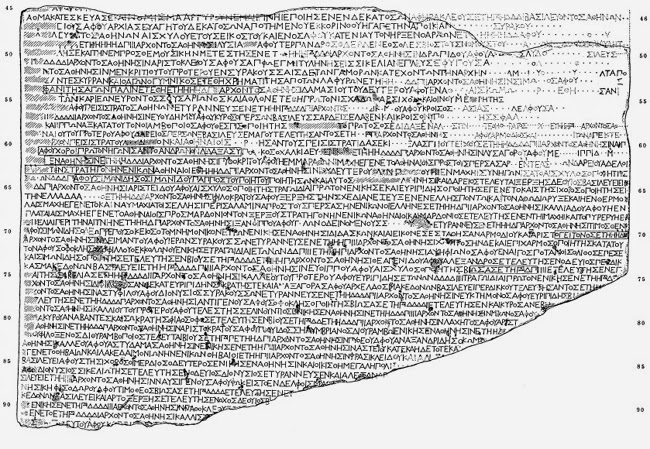 Two sections of the stele were found on the island in the 17th century by Thomas Arundell (1586-1643), 2nd Baron Arundell of Wardour, an ancestor of the 12th Baron, John Francis Arundell (1831-1906), who wrote a rebuttal [0648]  of Ignatius Donnelly’s Atlantis theory. A final third section was found on Paros in 1897, silencing claims that the first two were fakes.

As early as 1788, Joseph Robertson (1726-1802) declared the Chronicle to be a modern fake(e) in a lengthy dissertation[1401]+,  a claim disproved by the discovery of the final piece over a century later. Even before the third fragment was found, Franke Parker published an in-depth study of the inscription in 1859(f).

The first king of Athens is noted on the stele as the mythical Cecrops commencing 1582 BC. This is important as Cecrops is also mentioned by Plato in the Atlantis texts (Critias 110a). This date is far more realistic than the 9,600 BC told to Solon by the Egyptian priests to be the time of the foundation of Athens. The Parian Chronicle seems to have been given little attention regarding the Atlantis mystery. This lack of a direct reference to the Atlantean war may be explained by a comment in Britannica and cited elsewhere(k) which notes(g) that “the author of the Chronicle has given much attention to the festivals, and to poetry and music; thus he has recorded the dates of the establishment of festivals, of the introduction of various kinds of poetry, the births and deaths of the poets, and their victories in contests of poetical skill. On the other hand, important political and military events are often entirely omitted; thus the return of the Heraclidae, Lycurgus, the wars of Messene, Draco, Solon, Cleisthenes, Pericles, the Peloponnesian War and the Thirty Tyrants are not even mentioned.”

Of the philosophers, I note that Anaxagoras, Aristotle and Socrates are listed, but Plato is excluded(m). The high 29% of the entries focused on cultural events and personalities may explain this. So, although the Marble is a valuable document it is very far from being comprehensive.

Andrea Rotstein in a lengthy series of papers(i) discusses various aspects of the Parian Marble and also comments that “The Parian Marble, as many have noted, may be disappointing as a historical source. People and events that we deem important are missing: Lycurgus, Solon, Cleisthenes, Pericles, and the Peloponnesian wars, do not appear in the extant text.” (j)

Another name mentioned on the stele and by Plato is that of Deucalion. While there is some debate regarding the exact date of the deluge named after him, all commentators agree that it occurred in the middle of the 2nd millennium BC. J.G. Bennett(b) has calculated the date of this Flood to around 1478 BC, while Britannica(c) offers 1529 BC. Stavros Papamarinopoulos developed his own king list based on other ancient sources, which generally parallels the Parian content(d).

The chronicle is far from being comprehensive, particularly regarding the earlier years when understandably information is more sparse.

A paper in 2018 by George Kokkos took a brief look at some important events confirmed by the Parian Chronicle(p).

It is interesting that Valerius Coucke (1888-1951) a Belgian theologian who had studied the controversial subject of the chronology of the Kingdoms of Judah and Israel, employed the Parian Marble to support his theories(l). Independently, Edwin R. Thiele (1895-1986), an American archaeologist, who engaged in a study of the same period arrived at similar conclusions and is in complete agreement that the start of the divided monarchy began in Nisan of 931 BC, despite using different methods to arrive at this date. This may be interpreted as confirmation of the historical value of the Parian Marble!

A 2020 paper by Tony Petrangelo offers his view of the Parian Marble  and its relevance to both the Atlantis Story and the dating of the Trojan War.(n)

(i) Andrea Rotstein, Literary History in the Parian Marble (archive.org)

(j) 4. The Parian Marble as a Literary Text (archive.org)