Madeira, an autonomous region of Portugal, is a small group of islands in the Atlantic, just north of the Canaries. The archipelago includes the tiny independent Principality of Pontinha(a), which today has bitcoin as its official currency.

Ignatius Donnelly proposed it as one possible location for Atlantis. This followed soundings taken in the area at the end of the 19th century, which suggested that there existed a submerged 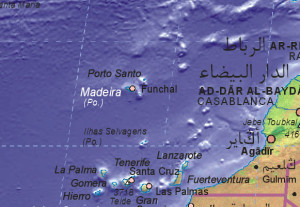 ridge linking the islands with the European mainland. Madeira is frequently linked with the Azores and the Canaries as visible remains of Atlantis.

In the 1920’s Edwin Bjorkman noted[0181.68] that many of his peers, including Richard Hennig(d), considered Madeira to have been Homer’s Ogygia, itself frequently associated with Atlantis.

Some commentators such as Gilbert Pillot[742.46] have remarked on the similarity of Madeira to the island of Aeolia described in Homer’s Odyssey.

There are a couple of YouTube clips(a)(b) that purport to show the remains of Atlantis on Madeira. In fact all they show are ruins, subjectively identified as Atlantis. Apart from which, unlike Atlantis, Madeira is obviously not submerged.

Unfortunately, I’m afraid the closest you’ll come to Plato’s famous island on Madeira is in a bottle of Blandy’s Atlantis rosé wine.