Atlantis in America [256] by Lewis Spence is one of five books on Atlantis written by Spence. In spite of the title, Spence believed that Atlantis was situated on a large continent that is now submerged which stretched across the Atlantic. 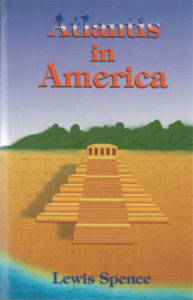 The idea of Atlantis as either a landbridge or a stepping-stone between the Old and New Worlds was popular for a period at the end of the 19th and beginning of the 20th centuries, but then faded as our knowledge of the geology of the Atlantic seabed grew.

This is a highly speculative book that compares various Native American myths that Spence believed pointed to a common cultural source he identified as Atlantis.

Spence was convinced that the influence of Atlantis is equally evident in western Europe. In an article in the Occult Review (1926) Spence voiced his view that Atlantis was located near Britain. This book, although somewhat dated has been reprinted (Kessinger, 1997) and is of interest to students of the development of Atlantis theories.