The term ‘Continent’, is derived from the Latin terra continens, meaning ‘continuous land’ and in English is relatively new, not coming into use until the Middle English period (11th-16th centuries). Apart from that, it is sometimes used to imply the mainland. The Scottish island of Shetland is known by the smaller islands in the archipelago as Mainland, its old Norse name was Megenland, which means mainland. In turn, the people of Mainland, Shetland, will apply the same title to Britain, who in turn apply the term ‘continuous land’ or continent to mainland Europe. It seems that the term is relative.

The term has been applied arbitrarily by some commentators to Plato’s Atlantis, usually by those locating it in the Atlantic. Plato never called Atlantis a continent, but instead, as the sixteen instances below prove, he consistently referred to it as an island, probably the one containing the capital city of the confederation or alliance! 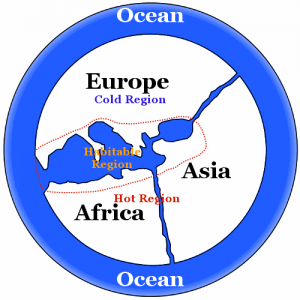 Several commentators have assumed that when Plato referred to an ‘opposite continent’ he was referring to the Americas, however, Herodotus, who flourished after Solon and before Plato, was quite clear that there were only three continents known to the Greeks, Europe, Asia and Libya [4.42]. In fact, before Herodotus, only two landmasses were considered continents, Europe and Asia, with Libya sometimes considered part of Asia. Furthermore, Anaximander drew a ‘map’ of the known world (left), a century after Herodotus, showing only the three continents, without any hint of territory beyond them.

>Nevertheless, there has always been a school of thought that supported the idea of the ancient Greeks having knowledge of the Americas. In 1900, Peter de Roo in History of America before Columbus [890] not only supported this contention but suggested further that ancient travellers from America had travelled to Europe [Vol.1.Chap 5].<

Daniela Dueck in her Geography in Classical Antiquity [1749] noted that “Hecataeus of  Miletus divided his periodos gês into  two  books,each devoted to one continent, Europe and Asia, and appended his description of Egypt to the book on Asia. In his time (late sixth century bce), there was accordingly still no defined identity for the third continent. But in the fifth century the three continents were generally recognized, and it became common for geographical compositions in both prose and poetry to devote separate literary units to each continent.”

So when Plato does use the word ‘continent’  [Tim. 24e, 25a, Crit. 111a] we can reasonably conclude that he was referring to one of these landmasses, and more than likely to either Europe or Libya (North Africa) as Atlantis was in the west, ruling out Asia.

Philo of Alexandria (20 BC-50 AD)  in his On the Eternity of the World(b) wrote “Are you ignorant of the celebrated account which is given of that most sacred Sicilian strait, which in old times joined Sicily to the continent of Italy?” (v.139). It would seem that in this particular circumstance the term ‘Sicilian Strait’ refers to the Strait of Messina, which is another example of how ancient geographical terms often changed their meaning over time (see Atlantic & Pillars of Herakles).

The name ‘Italy’ was normally used in ancient times to describe the southern part of the peninsula(d). Some commentators think that Philo was quoting  Theophrastus, Aristotle’s successor. This would push the custom of referring to Italy as a ‘continent’ back to the time of Plato, who clearly states (Tim. 25a) that the Atlantean alliance “ruled over all the island, over many other islands as well. and over sections of the continent.” (Wells). The next passage recounts their control of territory in Europe and North Africa, so it naturally begs the question as to what was ‘the continent’ referred to previously? I suggest that the context had a specific meaning, which, in the absence of any other candidate and the persistent usage over the following two millennia can be reasonably assumed to have been southern Italy.

Centuries later, the historian, Edward Gibbon (1737-1794) refers at least twice[1523.6.209/10] to the ‘continent of Italy’. More recently, Armin Wolf (1935- ), the German historian, when writing about Scheria relates(a) that “Even today, when people from Sicily go to Calabria (southern Italy) they say they are going to the “continente.” This continuing usage of the term is confirmed by a current travel site(c) and by author, Robert Fox in The Inner Sea [1168.141].

I suggest that Plato similarly used the term and can be seen as offering a more rational explanation for the use of the word ‘continent’ in Timaeus 25a, adding to the idea of  Atlantis in the Central Mediterranean.

Giovanni Ugas claims that the Mediterranean coast of southern Spain and France, along with the Italian peninsula constituted the ‘true continent’ (continente vero) referred to by Plato. (see below) 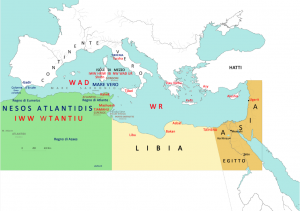 Furthermore, the text informs us that this opposite continent surrounds or encompasses the true ocean, a description that could not be applied to either of the Americas as neither encompasses the Atlantic, which makes any theory of an American Atlantis more than questionable.

Modern geology has definitively demonstrated that no continental mass lies in the Atlantic and quite clearly the Mediterranean does not have room for a sunken continent.