Sir Francis Bacon (1561-1626) was born in London and died at Highgate. Bacon was a statesman, philosopher and essayist and he is also frequently referred to as the father of modern science. Although he was not a great scientist, his promotion of the Inductive Method(a) of reasoning did help scientific 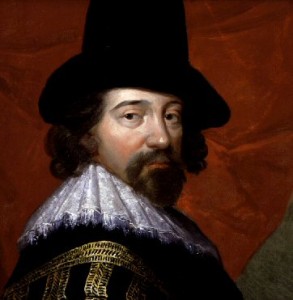 He was a lawyer and later a judge. In 1621 he was accused of taking bribes, a practice common among judges of the day. He confessed to some of the charges, but because he had the support of King James I, the fine of £40,000 was remitted.

In 1626, Bacon published The New Atlantis(c), generally accepted as a political fable, in which he located his fictional Atlantis off the west coast of America. In the same book he also describes a number of later inventions which probably also makes Bacon the first science fiction writer. However, David Hatcher Childress claims[620.221] that Bacon believed that ‘North Africa and the coast of Morocco’ to be Atlantis, but unfortunately provides no source or reference.

Bacon, who also received some land in America, has been linked with the strange Oak Island Mystery, regarding which it has been suggested that he had hidden there evidence of his authorship of Shakespeare’s plays! Both Ignatius Donnelly and Comyns Beaumont were supporters of this Baconian Hypothesis.

It is sometimes inaccurately(b) claimed that in 1620 Bacon also commented on the close fit of the South American continent with the outline of West Africa, presaging the inspiration behind Snider-Pellagrini and Alfred Wegner’s continental drift.