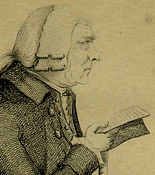 Jacob Bryant (1715-1804) was an English antiquarian and mythologist, who completely denied that the Homeric Trojan War had any historical value. This infuriated the Romantic poet Lord George Byron, who denounced Bryant as a ‘blackguard’. All this took place decades before Schliemann began excavating at Hissarlik.

Although Bryant denied the reality of Troy, he was content to declare that the ‘Atlantians’ were descended from Ham, one of Noah’s* sons and that they settled in Phrygia (part of modern Turkey) and Mauritania (North-West Africa). These comments can be found in one of his best known works, New System Or an Analysis of Ancient Mythology (1774 ed. Vol.1 p.387), which can now be read online[1033].