Cosmas Indicopleustes was a 6th-century AD theologian and geographer from Alexandria who became a monk in later life. He wrote of Atlantis as a large island in the western ocean punished by god with submergence. He also added a twist to the tale by recording a tradition that Noah had resided in Atlantis. Cosmas was probably the first writer to use Plato’s tale as evidence for the veracity of the Bible. He contended that Atlantis was the Garden of Eden and that Plato’s 10 kings of Atlantis were the 10 generations between Adam and Noah!

His only extant book, Christian Topography, is a bizarre work that includes support for a Flat (Square) Earth. A translation[1245] by J. W. McCrindle was published by the Hakluyt Society in 1897(b). 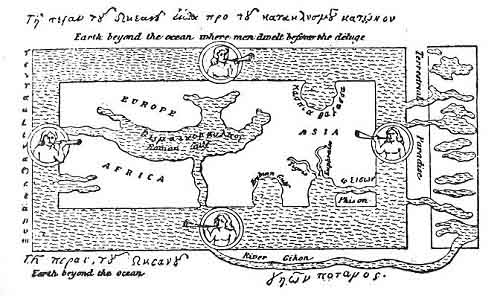 >It seems to me that Cosmas has added little to the Atlantis story except for further confusion. However, Thorwald C. Franke has published an essay on the relevance of Cosmas Indicopleustes to Atlantis studies(c).<

One commentator described his work as a ‘monument of unconscious humour.’

Jason Colavito has traced(a) some of Graham Hancock’s theories back through Donnelly, Faber, and Bailly and even as far as Cosmas.