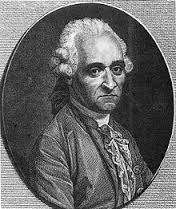 Antoine Court de Géblin (1725-1784) was formerly a Protestant pastor who later turned to seek esoteric wisdom through the Tarot! He claimed that the Tarot cards were the work of the ancient Egyptians, being one of their books that escaped the flames that devoured their superb libraries!(a)

According to Joscelyn Godwin[746.36] quoting Fabre d’Olivet, Court believed that Corsica and Sardinia held the remains of Atlantis.

(a) The Game of Tarots (archive.org)