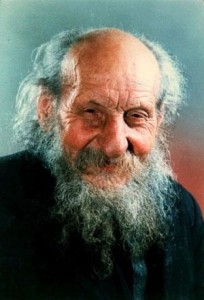 Crespi Croci (1891-1982), an Italian Salesian monk who did missionary work among the natives of Cuenca, Ecuador. The collection of objects includes gold, silver and a variety of alloys together with ceramics and tablets with unusual writing. The local Indians who allegedly found them in subterranean caves brought these goods to him. There is no doubt that Fr. Crespi knew that some of the artifacts offered to him were modern, made by locals who were able to get a little bit of charitable assistance while preserving their dignity. Father Crespi never properly catalogued them and over time a number of items were apparently stolen. At present some of these artefacts are stored in the church of Maria Auxiliadora in Cuenca. The caves referred to were apparently located by the late Juan Moricz in 1965. Erich von Däniken wrote about the caves and Moricz in one of his fantasy books, Gold of the Gods.

Further details about Fr. Crespi and his collection can be read in a paper by Marina Ivanova(g).

A somewhat eccentric website(a) from Stanley Hall expands on the story but without any real supportive proof. Among the collection is what appears to be a parapegmata or calendar of a type developed in Greece in the 5th century BC.

Many wild claims have been made about this strange assortment, including a link with Atlantis. Richard Wingate devoted a large section of his book, The Lost Outpost of Atlantis,[059] to the Crespi Collection.

It was over twenty year later that Wingate again wrote at length about Crespi in his 2011 book, Atlantis in the Amazon[771]. He describes how Crespi had much of his collection taken from him and recounts his last meeting with Fr. Crespi shortly afterwards, leading me to wonder why it took nearly thirty years to record this story.

Nevertheless, a 2015 blog from Jason Colavito(b) offers evidence that the objects in question were fakes and that the elderly Father Crespi was unable to distinguish between tin and silver or brass and gold. He also recounts how Erich von Däniken exploited Crespi’s ‘collection’ and fraudulently claimed to have visited the caves mentioned by Juan Moricz in Gold of the Gods[272]. 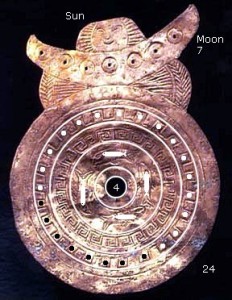 One of these(d) is so remarkably like a Roman parapegmata, that I find difficult to casually dismiss it! A parapegmata is a type of calendar originally developed in Greece during the 5th century BC(i). A full dissertation on the subject is available online(h).

In a follow-up to Holloway’s article, Ancient Origins co-founder, Dr Ioannis Syrigos, decided to investigate further into the matter of gold artifacts missing from the collection shown to Holloway. He reports that he was met with obfuscation and threats(e).

Commenting on Syrigos’ report, Jason Colavito has suggested that the missing gold pieces were a consequence of corruption or greed rather than conspiracy(f).