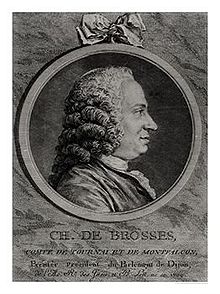 Charles de Brosses (1709-1777) was a celebrated French politician and writer. He was president of the regional parliament of Burgundy in Dijon. He had an interest in geology, history, and philology and is credited with coining the geographical term ‘Australasia’. He also believed that Atlantis was located in the Atlantic in keeping with the prevailing fashion of the period.

However, Atlantisforschung found that Thorwald C. Franke commented that de Brosses had “added a multi-page footnote on the subject of the Canary Islands to his account of the history of the Roman Republic published in 1777 based on his translation of Sallust. In this footnote, de Brosses rejected the interpretation of America as Atlantis and stated that Plato’s Atlantis appears imaginary. Contrary to popular belief, de Brosses belongs in the category of doubters. Nevertheless, de Brosses thought it worth noting that a stone statue pointing west was said to have been found in the Canary Islands(a).”