Count Byron Khun de Prorok (1896-1954) has been variously described an American with a Polish title or as a Pole married to an American. He was originally a conventional archaeologist having worked on the site of Carthage. He then developed into an adventurous 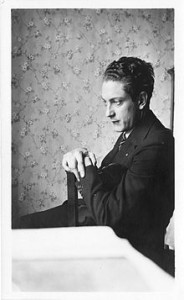 explorer in the early 1920’s and 1930’s whose escapades would have been worthy of Indiana Jones.

Perhaps his most famous achievement was the discovery of the tomb of the legendary Berber queen, Tin Hinan. However, this claim did not stand up to closer scrutiny as James Bramwell revealed in his Lost Atlantis[195.115].

He was author of a number of books recounting his experiences, including Digging for Lost African Gods, now available online(a).

His ‘discoveries’ were not given any serious consideration by orthodox archaeologists. He died unexpectedly in the mid-1950’s according to a report in the November/December 1958 edition of Sykes’ Atlantis journal.

The Wikipedia account of deProrok’s life is also worth a read(b).