Carthage is today a suburb of the North African city of Tunis. Tradition has it that the Phoenicians of Tyre founded it around 815 BC. Gerard Gertoux argues(h) that recent discoveries push this date back to at least 870 BC if not further. Prior to that, the Roman poet, Silius Italicus (100-200 AD), tells us that according to legend the land there had been occupied by Pelasgians(e).

South of Carthage, in modern Tunisia, there are fertile plains that were the breadbasket of Rome and even today can produce two crops a year, despite a much-disimproved climate.

In 500 BC Hanno, the Navigator was dispatched from Carthage with the intention of establishing new African colonies. Around a century later another Carthaginian voyager, Himilco, is also thought to have travelled northward(f) in the Atlantic and possibly reached Ireland, referred to as ‘isola sacra’. Christopher Jones has claimed on his website(d) that Himilco reached Britain and Ireland in the 5th century BC.

>Cecil Torr (1857-1928) the British antiquarian and author published a paper in 1891 entitled The Harbours of Carthage(j) in which he suggested that the layout of Carthage may have inspired some of Plato’s descriptions of Atlantis. However, we are now aware that some of these features did not exist until after Plato’s time.<

Sometime later Victor Bérard,  pointed out[0160] the similarity of Carthage with Plato’s description of Atlantis. Frank Joseph followed Lewis Spence in suggesting that Carthage may have been built on the remains of an earlier city that had been Atlantis or one of her colonies. In like manner, when the Romans destroyed Carthage after the Punic Wars, they built a new Carthage on the ruins, which became the second-largest city in the Western Empire. 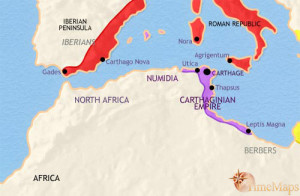 out of the city with a central Acropolis on Byrsa hill, surrounded by a plain with an extensive irrigation system, has prompted a number of other authors, including Massimo Pallotino[222] and C. Corbato[223] to suggest that it had been the model for Plato’s description of Atlantis. This idea has now been adopted by Luana Monte(c).

Andis Kaulins has suggested that “ancient Tartessus (which was written in Phoenician as Kart-hadasht) could have been the predecessor city to Carthage on the other side of the Strait of Sicily. Plato reported that Tartessus was at the Pillars of Herakles.”(a)  Kaulins places the ‘Pillars’ somewhere between the ‘toe of Italy’ and Tunisia.

Richard Miles has written a well-received history[1540] of Carthage, a task hampered by the fact that the Carthaginian libraries were destroyed or dispersed after the fall of the city, perhaps with the exception of Mago’s agricultural treatise, which was translated into Latin and Greek and widely quoted.

Delisle de Sales placed the Pillars of Heracles in the Gulf of Tunis.

A book-length PhD thesis by Sean Rainey on Carthaginian imperialism and trade is available online(b).