Dholavira is a recently discovered city of the Indus Valley civilisation, and is now estimated to be one of the five largest (out of 700) Harappan sites, covering an area of up to 100 hectares.* It is known locally as Kotada. Only 10% of the site has been excavated, leaving a promise of further important discoveries still to come.*

Its foundation is dated to around 3000 BC and it flourished until approximately 1500 BC(a). 2010 saw the first discovery in Dholavira of an inscription on natural stone in the Indus script. 2011 produced a report(b) that what may be the world’s oldest theatrical stage had been found on the Dholavira site. 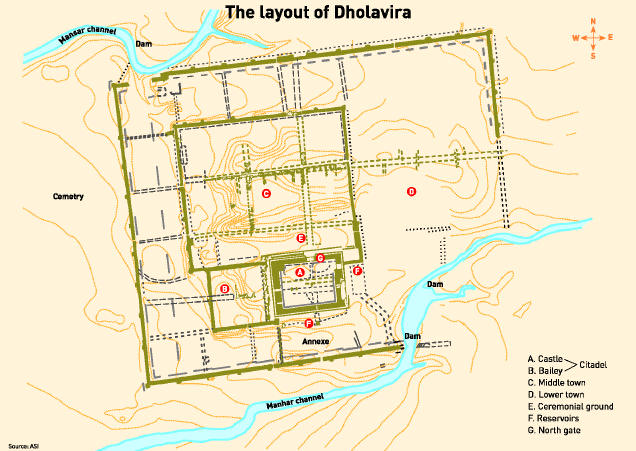 In October 2014 it was reported that a stepwell, dated to 3000 BC, had been discovered at Dholavara that was three times the size of the ‘Great Bath’ at Mohenjo Daro(c).

The city has number of special features outlined on a Pakistani website in 2015. The same posting(f) suggests that “the Indus Valley civilisation. Ideally it should be called Indus-Saraswsati civilisation, but the work to trace the path of saraswati is still in progress.”

At least two writers have claimed Dholavira as the source of Plato’s Atlantis story. Radek Brychta who has already written(d)(e) on the subject of an Atlantean connection and Yashwant Koak who is planning to publish in the near future,*although, as of May 2018 nothing further has been heard of this.*One claim is that “the archaeological discoveries at the site of Dholavira matches 90% of the description of the Atlantis city.”

*Brychta wrote an article on his Atlantean Dholavira for the Atlantisforschung.de website(d)..