From Atlantis to the Sphinx (L) 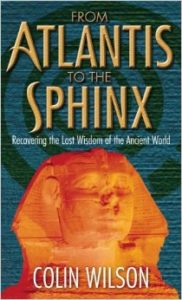 From Atlantis to the Sphinx: Recovering the Lost Wisdom of the Ancient World [335] by Colin Wilson, presents the idea that the inhabitants of Atlantis were the precursors of the ancient Egyptians as well as the Maya and Aztecs. He perceives Atlantis as a seafaring nation with worldwide reach. He contends that Atlantis was originally located in Antarctica and was destroyed in a worldwide catastrophe. This theme is developed further in a second book[063] that Wilson co-authored with Rand Flem-Ath. More recently Wilson has altered his views and supported Robert Sarmast’s claim for Atlantis being located off Cyprus.

To support an extended antiquity for Egypt, he outlines evidence for a 10500 BC construction date for the legendary Sphinx. Unfortunately, most of the material is a re-working of information to be found elsewhere.