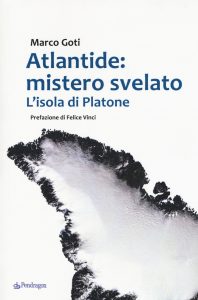 that Atlantis was situated in Greenland. I say attempts because, in my opinion, he fails dismally. He starts by locating the Pillars of Heracles in the Atlantic, with one side being the basaltic columns at the Giants Causeway in Northern Ireland and their counterparts across the sea in Scotland’s Isle of Staffa. This idea was touted by W. C. Beaumont over sixty years earlier(a).

Goti then moves on to Iceland, which he identifies as Thule and spends too much time describing a variety of unpronounceable locations there. He eventually heads for Greenland, which he contends must be Atlantis as it is greater than Libya and Asia combined, ignoring that Plato was referring to might rather than size. Goti posits the huge plain described by Plato to have been situated in the centre of Greenland, ignoring the fact that ice cores dated to over 100,000 years have been identified there, and apart from which the huge island is not submerged.>He offers two papers with extracts from his book(b)(c) as well as some evidence of neolithic activity in Greenland(d).<

Goti decries other promoters of Atlantis theories for ignoring details in Plato’s account that doesn’t fit their particular ideas and then he moves Athens to Sweden, has Atlantis above water for hundreds of thousands of years, no elephants, no two annual crops and does not explain how Greenland Atlanteans controlled southern Italy as far as Tyrrhenia, all of which demands a thumbs down from me.

(b) The Geometry of Atlantis according to Plato (1/2) – The Tapestry of Time (larazzodeltempo.it) *

(c) The Geometry of Atlantis according to Plato (2/2) – The Tapestry of Time (larazzodeltempo.it) *