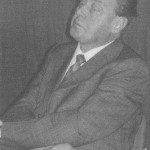 Atlantis[687]. He reviews the most popular theories of the period in the light of discoveries at that time. It may now be considered somewhat dated. He agreed with many of Spanuth’s conclusions, identifying the Atlanteans as the Sea Peoples, originally from the North Sea.