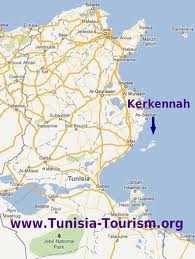 Kerkennah is the name of a group of Tunisian islands situated off its east coast.*The archipelago is one of the locations claimed to include Homer’s ‘Island of Goats’ and the home of the Cyclops in the Odyssey.*

In a recent book[980] by Antonio Usai he claims that the original Pillars of Hercules were situated between the islands and the mainland. In support of his contention he quotes fron The Voyageof Hanno and other classical writers.

Férréol Butavand thought that Atlantis had existed in the Central Mediterranean and had included the Kerkennah Islands. Alberto Arecchi has expressed similar views.